This is part two of a series – A Running DisNerd, in which I discuss my desire to prep and run in a RunDisney event. In this case, it’s the Never Land 5k, in conjunction with the Tinker Bell Half Marathon Weekend. Being my first 5k of any kind, I’m going in not really knowing what to expect, but sharing with you, friends and fellow DisNerds, as I go. You can read A Running DisNerd, Part 1: I Don’t Run, here.

Well, the past month has crept on me, and I still feel as though preparations have not gone as well as planned. Now, this isn’t to say I’m not doing the Never Land 5K. I promise you, I will be there on Friday, May 8th, and I will give it my all. I don’t give up. But, I may be walking a bit more than running.

But I’m actually okay with this. You see, this is my first running event anywhere. It’s a push to a personal realization that I do need to be in much better shape than what I currently am. I’m using this realization to keep me going forward and doing this 5k, even if I’m going to do a portion of it walking.

Because it beats sitting still.

And what better way to do this than with the aid of Disney? I’ve already been supported by friends and fellow DisNerds – your words of encouragement have definitely inspired me! I have also talked to others who have run in these RunDisney races, and have heard that, for a starter, there’s no better race to run for support and fun. I’m definitely approaching with the fun factor in mind, as is the rest of my family. In fact, the Little DisNerd (7 years old), the dancer in the family, has informed us that she plans on sashaying through the entire run, unless she sees Peter or Wendy, because, you know, Peter and Wendy. Speaking of, we’ll also be doing a little bit of dressing up. What’s the fun of running a Never Land 5k if you’re not being part of Never Land in the process? I’m definitely focusing on the fun – I’m running through Disneyland and Disney California Adventure, so that will help! I will finish the race. If nothing else, I plan on starting by running and crossing the finish line running. There aren’t many opportunities to run through Disneyland without security asking you to walk safely, so we might as well take advantage of the opportunity! If I walk more than run, so be it. I will still be taking those first steps to getting in better shape, and enjoying the magic of Disney in the process! 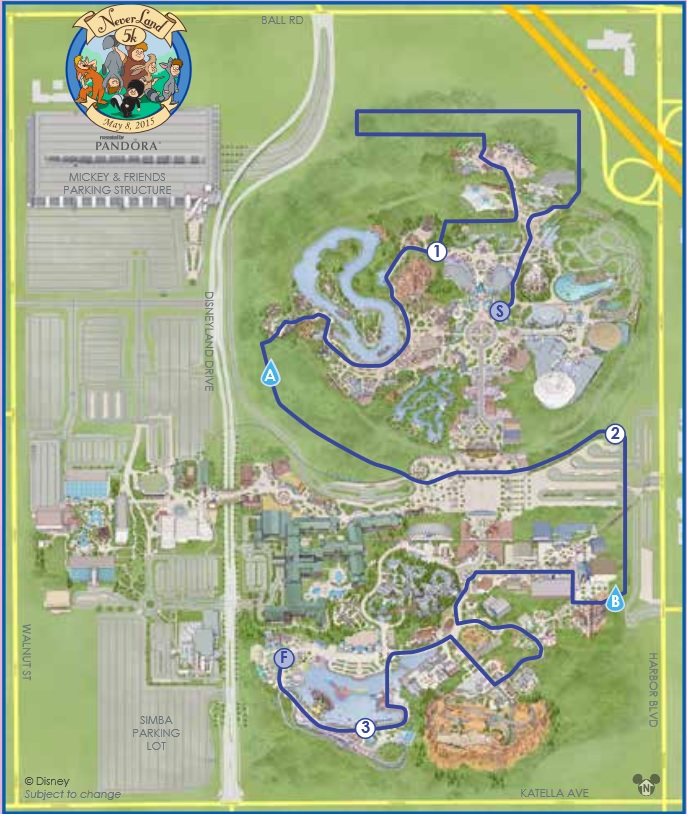 If you’re going to run, why not run through the Happiest Place on Earth?

I’m just a few days away, friends. I appreciate the well wishes and support. Over the weekend, I plan on posting and sharing pictures of not only the 5k experience, but of the parks and goings on as well. Make sure you’re “liking” Confessions on Facebook, as well as following on Twitter and Instagram. You never know where something may show up! Once I’ve returned, I’ll be blogging my views on the entire RunDisney experience – I look forward to sharing more with you!

If you frequent Disney Parks or follow the Disney Parks Blog (or many other blogs for that matter) online, I’m sure you’ve heard of RunDisney. In case you haven’t, RunDisney is Disney’s, you guessed it, running division. If you’ve heard of a marathon, half-marathon, 10k, or 5k taking place within the confines of Disney-owned property, it’s a RunDisney event. Countless numbers sign up for these events many months in advance to run different themed competitive and non-competitive races throughout the parks. The races have been known to sell out in days, sometimes even hours! At any RunDisney event, you will see all types of runners, including many costumed runners, depending on the theme of the particular run they’re participating in. These races seem to be the perfect type of events for Disney fans, young and old, who are into running as well. And I’ve always thought to myself, “Well, that’s nice for them.”

But not for me. I’ve never been a runner.

Okay, there was that one fifty-yard dash in fifth grade, where I managed to come in fifth place, and actually got a ribbon. However, my running days pretty much began and ended there. I’ll admit, I’m out of shape. I’ve been meaning to do something about that. But running has never been one of my preferred methods. Do I run? Maybe when chased, but that’s about it. Therefore, is RunDisney for me? Had you asked me previously, I would tell you it was not in the cards. At least, this was the case up until last summer, when Mrs. DisNerd mentioned that registration was going to be opening up for the Tinker Bell Half-Marathon weekend in May 2015. The event that specifically caught our attention was the Never Land 5k. If you’ve been reading Confessions for any amount of time, you know through posts such as “Still Living In Never Land” and “Real Character (Or, How Peter and Jake Made Wendy’s Day Perfectly Darling)” exactly how much Peter Pan and his Never Land family mean to us. With that being said, if there were a RunDisney event I was willing to participate in, the Never Land 5k would be the one.So, on that August morning, as registration opened, I registered our family to run in this event, with full intent of getting in shape for the run.

I’m ashamed to admit, this hasn’t happened yet for yours truly, and I’m running out of time. A little more than a month out, and this DisNerd is nowhere near ready. I could blame injury (not the best knee in the world, a sprained ankle at one point), I could blame allergies and sickness, but in all honesty, what I blame most of all is me. Between everything else, there still should have been time to train and prep. It just hasn’t happen, and I can only point the finger at myself.

With that realization out of the way, I feel there is still time to ready myself for a 5k without killing myself. I know I could walk at a brisk pace even. But this is RUNDisney, and now I have something to prove to myself. So begins a month and a half of training, to get into a decent running/jogging shape, and cross the finish line to earn my first 5k medal.

Will winning this make me an honorary Lost Boy?
Picture copyright The Walt Disney Company

I plan on posting an occasional update on my progress here, as well as sharing my overall experience with a RunDisney event. I’d like to ask you to join me on this journey. I’d also like to hear from you, fellow DisNerds. Any other RunDisney participants out there? I’d love to know your stories or experiences – maybe we can inspire each other! Can’t wait to share with you all at the finish line!