Hello, everybody, and welcome to a special edition of “Ask a DisNerd!” Though normally posted on a bi-weekly basis, I’ve decided to answer this one off of schedule, because I think it’s such a good question to be addressed for families thinking of taking a trip to a Disney Park with little ones in tow. Confessions reader Lyndsey asks, “What are the best rides/shows/restaurants for families with toddlers? People say you shouldn’t go to Disney with toddlers and I have to believe there is a good plan for families with small children. Thanks!” 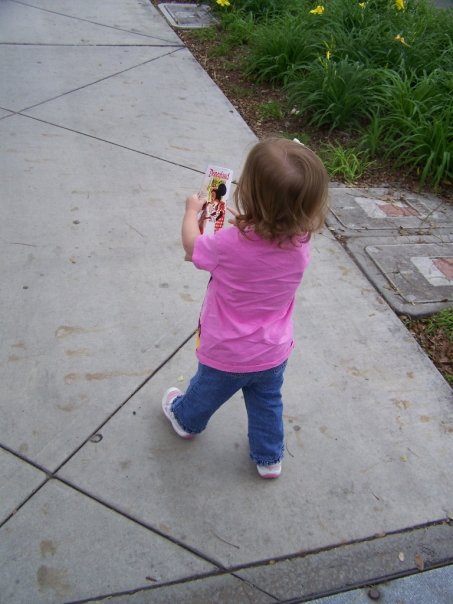 “I may be little, but I’m ready to find my way around a theme park!”

Lyndsey, this is a great question. Having been taking my daughter since she was 20 months old, I feel I have some answers for you. However, I feel I should note as well that what works for one does not necessarily work for others. This is just the opinion of one DisNerd (but others, feel free to join in the discussion in the comments section!).

To really answer the question, I’d start with the second part that’s more of a statement: “People say you shouldn’t go to Disney with toddlers and I have to believe there is a good plan for families with small children.” There is most definitely such a plan. It’s called going FOR the toddler. The instant you forget you’re taking this trip for them, you’re missing out on the reason you’re going. Your kids are going to move at a different pace than you. They may want to look at a fountain when you’re trying to make it to a ride, but remember: this is the first time they’ve seen that fountain. There’s childlike wonder in the little things that we take for granted; things that we only pay attention to after we’ve made it onto the newest ride.

My daughter’s favorite attraction on her first trip may have been a cement slab in place for construction – but what fun it was!

With that being said, remember they’re likely to be overwhelmed – I still can be myself when I walk through those gates! Great “first rides” would be Dumbo or It’s a Small World – rides that are relatively tame, but to a young one’s mind bursting with wonder and color. I learned the hard way after going with a friend and his three year old for the first time many years back that Pirates Of the Caribbean probably isn’t a great ride to start with on a child’s first trip! That comes later – IF you decide they’re ready for it. They may not be. The first trip we took, my daughter went on any ride we would take her on. However the next few times we went, she went on very few rides: It’s a Small World, Dumbo, Mad Tea Party, King Arthur’s Carousel and the Main Street Vehicles were some of the only attractions she’d be willing to go on. But that was okay. Mom and Dad may not have been able to ride everything they wanted to (Grandparents and single rider lines allow for some wiggle room), but we were able to have fun with our child, who absolutely loved meeting characters, watching parades and walking through stores. She was in her element, and we made some truly magical memories.

So what rides exactly would I say are good for toddlers? Having only been to the Disneyland Resort, I can offer up a short list from there. However, as I say, it’s different for all. Rides that may work (but not necessarily limited to) are:

The Many Adventures of Winnie the Pooh

Mickey and the Magical Map

Any of the street entertainment in Disney California Adventure

As far as restaurants, the best I can say is it depends on your child’s taste, as well as how well they would sit in table service locations such as Carnation Cafe or Cafe Orleans. Also, if it’s their first time, I would recommend against making reservations for character dining until your little one has met characters. Some kids can be quite intimidated – add that to the child being strapped into a high chair as a giant fuzzy head comes toward them…well, it might not be so pretty!

This list is nowhere near complete – feel free to add yours to the list in the comments section!

For more great tips and ideas on this subject, I highly recommend the wonderful Babes in Disneyland blog!

Most important is, have fun! It doesn’t matter what age you take them. Just be prepared to compromise your expectations with your child’s experience. See it through their eyes instead, and I’m sure you’ll have a blast!

4 thoughts on “Ask a DisNerd – Toddling Through the Parks”